If hydrogen fuel is the future, it has been for quite some time. In 1874 science fiction author Jules Verne set out a prescient vision of hydrogen as an inexhaustible source of energy that has inspired governments and entrepreneurs ever since. During the oil crisis in the 1970’s, hydrogen resurfaced once again as a potential alternative fuel for cars and in 2003, George Bush heralded hydrogen vehicles during the first wave of real concern about climate change. Now, 147 years after Verne’s famous novel ‘The Mysterious Island’, and at a time when the climate challenge has never been so urgent, hydrogen once again claims the spotlight.

Why is everyone talking about hydrogen?

There has been a lot of hype about hydrogen, many believe it to be the best (or only) way forward to net-zero. The world’s first hydrogen supercar is being developed in Leicestershire, and Dutch company Orsted believes ‘renewable hydrogen can become an industrial stronghold of several European economies, including Denmark, while also contributing significantly to bringing down emissions from the hard-to-abate sectors in transport and industry’. So why do people believe in it so strongly? 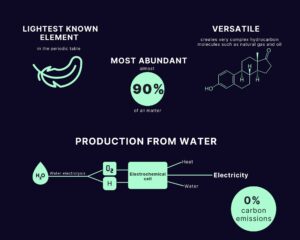 The big picture and why it matters

For now, there are mixed opinions on how successful the UK’s net-zero target is going to be. Even though we need to make significant progress, electric cars are almost exclusively dominating the conversation, to the detriment of alternatives, such as hydrogen, that could play a significant role. To change the dynamic, the UK government recently announced £171 million in funding for nine projects to reduce emissions and develop full-chain hydrogen projects, while outlining a plan to introduce carbon pricing on industrial pollution as part of its climate change strategy.

Even though electric vehicles (EVs) are not fully mainstream (yet), manufacturers continue to develop new models in line with government regulations, steadily increasing consumer demand, and growing investment into supporting infrastructure.

For hydrogen to catch up it would require tremendous policy support, since there are not enough vehicles on the road to warrant massive fuelling station build-out programmes. The lack of investment and development has meant that vehicle costs remain high compared to alternatives, making hydrogen a less attractive choice for consumers. It seems clear that BEV passenger vehicles will be the winner in the short-to-medium term.

The question then really is around how to decarbonise the larger vehicles in the market. There are good reasons to think that these are unlikely to take advantage of the same electric battery technology as their smaller counterparts, primarily due to the significant weight and volume of batteries. However, hydrogen use is developing quickly in road transportation, especially for buses and larger commercial vehicles.

Despite impressive advances, bus battery technology is still not optimal. To avoid putting all their clean energy eggs in one basket, the UK has consistently been evaluating hydrogen fuel cells as an alternative. With the “Bus Back Better”, a new national strategy, the UK government has committed to ending the sale of new diesel buses and increasing sales of British-built, zero-emission models. As part of this move, Wrightbus is planning to introduce 3,000 hydrogen buses to the UK, with the first 50 soon to be deployed across several cities.

The upfront costs for hydrogen-powered buses were originally substantially higher than either diesel or electric models, with figure close to £1 million each. Due to technological advances, prices have dropped significantly since the early deployments to be in line with electric alternatives.

Electrolysis, unlike battery charging, places a relatively steady demand on the energy network throughout the day and requires a significant investment in the available infrastructure to accommodate a growing number of buses. So far this is only possible at selected few stations. For example, Aberdeen’s King Street depot had to undertake some major work, from electrical points at each parking bay to pre-heat vehicles, to roof sensors mapping the levels of hydrogen in the atmosphere, and modifications to workshops. To make the technology viable across the country, significant investment would be required.

Possible solutions for the current ‘chicken and egg’ problem of incentivising hydrogen supply and the development of new hydrogen vehicles could be addressed by creating ‘hydrogen transport clusters’ via industrial areas with potential sources of low-cost, low-carbon hydrogen (such as Aberdeen or Tees Valley), which also have significant demand for transport with vehicles largely tied to these areas. Shell and ITM Power are developing a refuelling network for hydrogen trucks as well as buses, trains, and ships for the UK, but there is a long way to go. With no significant distribution infrastructure in place, it might be at least 5 to 10 years before hydrogen can be used on a large scale for heavy-goods vehicles

As a step in the right direction, the UK government recently provided £54 million of funding for three projects to develop hydrogen powertrain technology for use in commercial vehicles and buses, while £32 million will go directly towards the development of electric propulsion systems for heavy goods vehicles.

It is often argued that BEVs will be used for shorter ranges, while biofuels will find use on longer distances, leaving no middle ground for hydrogen. The deciding factors between hydrogen and battery are mostly around operational considerations, such as range, payload, refuelling time, and available infrastructure. Powering trucks with batteries is not as straightforward an option as it is with cars, as the additional weight equates to a loss of cargo capacity. These large commercial vehicles simply cannot afford to sacrifice the payload to accommodate the weight of batteries.

The infrastructure is far less developed than the BEV charging network. As a result, fuel cell vehicle uptake is significantly lagging that of battery electric cars and major OEMs have been pulling out of the hydrogen race, with Scania being the latest. At the same time, several key manufacturers, including Toyota and Hyundai, remain committed to FCEV development, while the government is supporting a new hydrogen platform development scheme as part of Jaguar Land Rover’s ongoing transformation programme. Before hydrogen has a chance to become mainstream, there is significant work required, from large-scale production to significant refuelling infrastructure investments.

A significant aspect holding back widespread hydrogen fuel cell adoption is the predominant process of hydrogen generation. Electrolysis of water, while promising and clean, is not yet efficient enough, nor available on industrial scale. The process of splitting hydrogen from oxygen consumes around three times more energy than can afterwards be generated by the fuel cell inside a vehicle, significantly lagging energy efficiency that can be achieved by BEVs.

At this point, the discussion often turns to costs, as hydrogen remains more expensive than its petrol or BEV competitors, partly due to the sophisticated technology involved. Luckily, this is changing fast. Renewable energy generation is increasing steadily, as installation costs continue to tumble due to advancements in manufacturing. As the input into the electrolysis process is getting cheaper, so is hydrogen. In addition, a growing industry will benefit from economics-of-scale (incl. automation and digitalisation), a process petrol and BEV vehicles have already gone through, while scientists work tirelessly to improve the process of hydrogen generation, with significant advances over recent years. Finally, costs of carbon are expected to increase significantly, and this is part of the equation in making hydrogen more affordable. As we continue to develop the industry and push on the frontiers, we can expect it to be competitive with alternative fuel sources.

What would Verne say (WWVS)?

Almost 150 years after Jules Verne first imagined a world powered by hydrogen, it is still not clear how prescient the idea really was. Significant investment by private companies and governments into BEV technology have led some observers to declare the race for the preeminent environmentally friendly power source to be over. While this article points out interesting developments for hydrogen-fuelled buses and trucks, it is important to mention ships and airplanes, where the advantages of hydrogen may prove Verne right all along.

Is your business struggling with the innovations of the future?

Then get in touch with us for a free consultation.

Email us at info@y-mobility.co.uk with any questions or queries