POD Driver-less vehicles to be deployed in Manchester, UK

In an interesting update this week, it has been announced that driverless vehicles will be deployed and tested this year on Greater Manchester’s roads. The two-part project is expected to run as a trial which will see passengers ferried across Manchester Airport in futuristic pods using technology and sensors to run without a driver, both on  roads (including the new Airport Relief Road) as well as the airport site itself.

The programme itself (estimated to be worth more than £5b) is funded through the Governmental Innovation grant and the vehicles are all funded by the Westfield Technology Group which now also has a Manchester office. Westfield POD (Pod On Demand) is a four-to-six seater vehicle with no steering wheel or pedals within the vehicle itself. There will of course be a steward on board who can stop or slow the vehicle down but even he will not have full control of it.  The vehicles to take part in the £5m pilot – funded through a Government innovation grant – are currently being manufactured by Westfield Technology Group, which has now opened an office in Manchester. 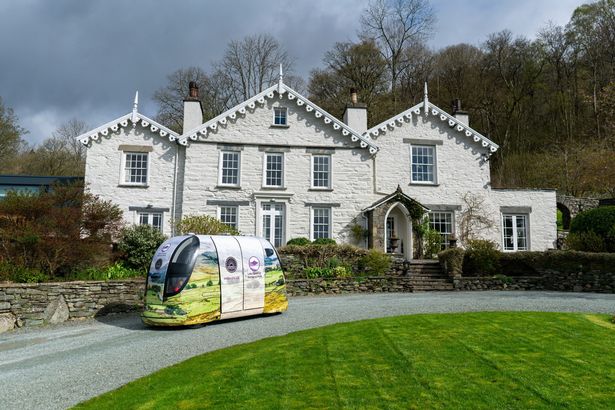 In addition and as part of the trials there will also be a ‘virtual concierge’ – an interactive voice for partially sighted users, as well as  a communication system between the sports cars and the TfGM control centre to report back on congestion or roadworks information.

“The city region has always welcomed innovation and new developments in technology and engineering, and this project demonstrates their local commitment to maintaining this outlook.

“Project Synergy will do a number of things – it will offer travellers with reduced mobility a new option to try at Manchester Airport, to make their journeys easier and, it will help explore the potential positive benefits associated with platooning, including reducing congestion and improving energy efficiency.”

The purpose of this trial is not only about “show” and future ideas but also about learning what Manchester needs to do to get its infrastructure ready for future innovation. As the strategy director for Transport of the project, Simon Warburton quoted “We thought we could get some real value out of trialling the potential for autonomous vehicles to get more efficiency out of the network.Clearly if you’ve got a set of autonomous vehicles that can all drive in formation then you could use them for future public transport services. The Victorians looked at the railway and took a a while to get round to things like timetables. We need to start to look at the story of technology. This is not going to happen overnight. But ultimately what we are looking to try and do is use the technology boost to help us improve the transport system in the interest of residents and businesses.”

Are you or your company involved in the project or perhaps interested to learn more? Email us now or simply comment below for more information.