The Importance of Sensors in CAV

The mobility market (and especially autonomous vehicles) have had a sudden swift back to mainstream news the past few weeks for a number of reasons. Whether that may be the autonomous vehicles deployed in Manchester and London,UK, the merges of giant automotive players such as BMW and Daimler or the fact that autonomous robots and other similar technologies are being used more and more progressively, the hype about CAV and the mobility market in general is only expected to continue.

Advanced Driver Assistance Systems (ADAS) are slowly but steadily developing into full autonomous vehicle systems worldwide and companies in the industry along with numerous OEM ‘sand technology suppliers are spending billions of dollars to create the first practical self-driving (SD) cars that will be deployed on our streets. Despite the many technical (And other) challenges having to be dealt with (along with new ones arising daily) it is more the legal/social/human issues that need to be resolved. Nonetheless, companies are starting to better communicate their technologies and their efficiency to people whilst improving security in order to create an ecosystem that allows this change to slowly integrate itself into our society.

Active sensors send out energy in the form of a wave and look for objects based upon the information that comes back. One example is radar, which emits radio waves that are returned by reflective objects in the path of the beam.

Passive sensors simply take in information from the environment without emitting a wave, such as a camera.

Sensors in autonomous vehicles have to be extremely reliable, since in the future motorists will no longer constantly monitor traffic while underway. In the past these sensors were subjected to arduous road tests

Autonomous vehicles are effectively robots that must have the equivalent sensing ability of a human – or as close as possible to that – in orde to be able to operate safely and securely. Most of that is “seeing.” The developers are using multiple sensors to create an equivalent composite view suitable for driving. Some of these being Lidar, IR Cameras, Ultrasonic,  Radar and Video Cameras. 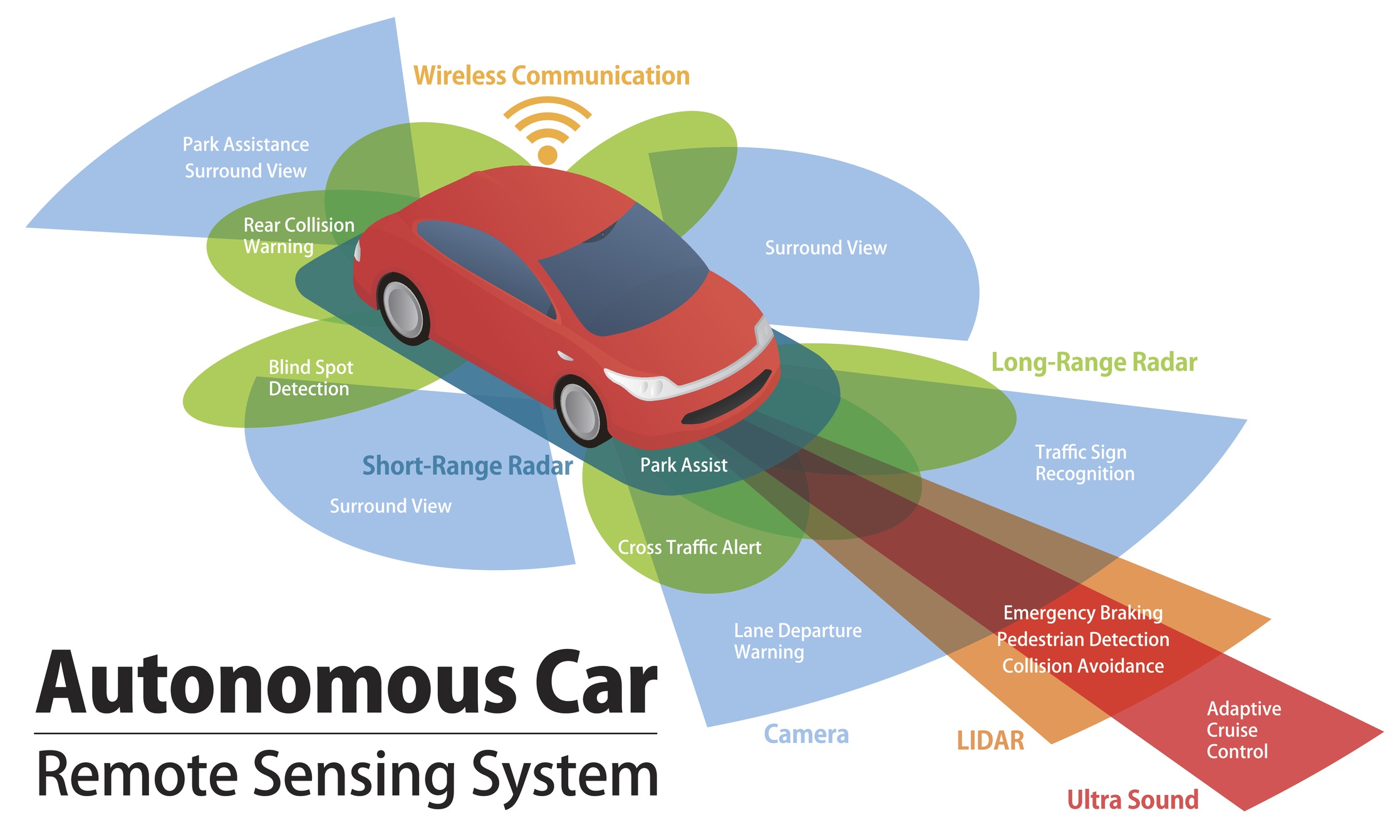 Nonetheless, all these sensors are still not able or merely good enough to be able to stand alone and hence safely guide the vehicle independently. However, when it comes to their collective power, these sensors are able provide the 360-deg. view around the vehicle (see image below) to detect nearby objects, identify them, avoid them, and provide that information to the steering, throttling and braking controls.

However, despite their collective use it also creates another issue. They generate a huge amount of data concurrently that then needs to be stored, transported to processors that will in turn make use of the data for driving instructions and other functions…

This is where the real processing begins and the importance of the software in use that has to be able to provide these functions.

Conclusively as has been explained above, sensors are crucial to making the vehicle as “cognitive” and “human” as possible but when it comes to the enormous amount of information created by them, the software has to take the baton in the race and assist in processing – analysing and translating it into useful and meaningful information the to the driver and the company.

In our next blog, we will discuss the capabilities and limitations of such software out there in the current market as well as the improvements needed.