The Role of Huawei in 5G Networks in the UK

Almost everyone nowadays has heard of Huawei. A Chinese giant of technology and the second largest smartphone maker in the world by market share.

Some may however argue, they have only heard of Huawei in light of the recent scandal with the United States and allegations their equipment and technology can be harmful due to malicious code.

The telecoms powerhouse has been the focus of intense international scrutiny lately by both media and governments alike. Several countries have raised security concerns about its products whilst the company has also been accused of stealing trade secrets in the United States which has led its Chief Financial Officer – Meng Wanzhou – to be kept under house arrest in Canada.

It has now been announced – despite major pressure from many governments including the US and Germany – that the UK have taken a stance on the matter. Considering the evident lack of alternative options, government officials have recommended that the Chinese telecoms company Huawei should be given a limited role in developing fifth-generation mobile networks in Britain. This comes as a major surprise to some but not necessarily all so let’s have a closer look at the matter.

Huawei is an independent, privately held company that provides information and communication technology (ICT). Founded in 1987, they are considered a leading global provider of information and communications technology (ICT) infrastructure and smart devices. They boast over 188,000 employees, and operate in more than 170 countries and regions, serving more than three billion people around the world.

In news announced officially by the UK Prime Minister, Boris Johnson, Huawei has now been given access to build non-core parts of the country’s 5G infrastructure. This sets an important precedent as the wireless tech becomes increasingly mainstream and has faced much negative press on its security this year.

Huawei is a key supplier for all four major UK operators having supplied cutting-edge technology to telecoms operators in the UK for more than 15 years. MPs and intelligence chiefs have equally reassured that there is no technical reason to exclude Huawei and that the decision is clearly a political one, with costs and the public in mind.

It is however a decision that comes with some major and unprecedented restrictions. The Chinese firm has agreed to be excluded from sensitive geographic locations and will have its UK market share capped at 35%. The UK Government has also decided against using any sort of Huawei equipment in or near any military bases or nuclear sites, as well as all safety-related and safety-critical networks in the Critical National Infrastructure. In effect their expertise will be limited to the periphery access network, which connects devices and equipment to mobile phone masts rather than building the core network of 5G itself.

Reaction to the agreement

There has indeed been a mixed reaction from leading figures worldwide as well as governments themselves. Indeed, the sternest warning came from the United States – a longstanding UK ally – in the words of US Senator Tom Cotton. As he noted: “This decision is deeply disappointing for American supporters of the Special Relationship. I fear London has freed itself from Brussels only to cede sovereignty to Beijing. Allowing Huawei to the build the UK’s 5G networks today is like allowing the KGB to build its telephone network during the Cold War.”

The Scottish were equally harsh in their verdict John Nicholson stated: “Many will think that this decision is born out of weakness – it has come about as a result of short termism and decades of under-investment. The prime minister has gone for the cheapest, least secure option, but it doesn’t take a genius to work out why Huawei is so competitive. It is the Chinese communist party branded as a company.”

Nonetheless, Nicky Morgan, the UK Digital minister quoted: “We want world-class connectivity as soon as possible but this must not be at the expense of our national security. High risk vendors never have been and never will be in our most sensitive networks.

The government has reviewed the supply chain for telecoms networks and concluded today it is necessary to have tight restrictions on the presence of high-risk vendors.”

Huawei themselves – through the voice of Victor Zhang, their Vice President – have welcomed the decision, saying they felt “reassured” by the UK government’s confirmation that it can continue its 5G rollout.

This evidence-based decision will result in a more advanced, more secure and more cost-effective telecoms infrastructure that is fit for the future. It gives the UK access to world-leading technology and ensures a competitive market”. 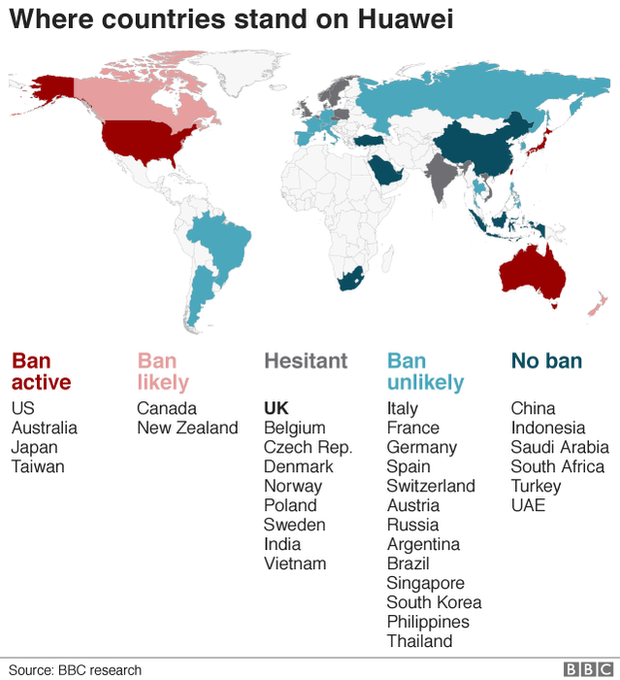 The decision has most definitely caused waves in the industry and speculations as to whether the partnership will come to fruition. The American government is already sending officials to the UK, to discuss a potential agreement for future termination (And elimination of Huawei) of their agreement with the Chinese conglomerate. However, many on the other side still argue that simply striking Huawei off would cost hundreds of millions more and potentially delay the rollout of 5G by a couple of years.

Feel free to let us know what your view is on the US-China trade war, the Huawei involvement in UK networks and contact us if you require any further information.